The Rev. Merton P. Strommen, PhD, died peacefully on Monday, September 2, 2019, in Minneapolis, Minnesota. He was 100 years old. Dr. Merton P. Strommen was an internationally known pioneer in youth research who founded Search Institute, conducted dozens of studies, and was considered the “grandfather” for a whole generation of youth work.

Mert had many, many interests and passions, and he was insatiably curious about everything. For many years, he gave concerts on his grand piano for the residents of the senior living center where he and his wife, Irene, spent their final years.

Most of all, he was deeply committed to his calling: to make the world better for young people. His commitment left an indelible mark on thousands of leaders, young people, and institutions across the country and around the world. And at an age when many great grandfathers would have long since turned their attention to other matters, he maintained an avid interest in and commitment to his life’s work. 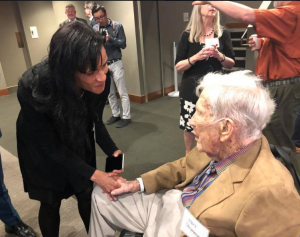 Mert Strommen and Cheryl Mayberry, Vice President of Improvement Solutions, visit at the Search@60 event in 2019.

As recently as 18 months ago, Dr. Merton P. Strommen called and asked to meet with me to discuss a research project idea for Search Institute. This was not unusual. Nor was it unusual that in June, he was eager to attend the public release of Search Institute’s release of the FrameWorks Institute study Reframing Developmental Relationships, even though he had just been released from the hospital a few days earlier. As we drove to the event, he peppered me with questions about the methodology.

Mert founded Search Institute in 1958 as Lutheran Youth Research. Starting an independent nonprofit applied research organization was not easy. Mert would tell stories of the early years, when new projects would come just in time before they thought they would have to close the door. Sometimes the projects didn’t come, and the staff had to be reduced to a skeleton crew.

At least once in the 1960s, Mert had to take out a second mortgage on his home in order to meet payroll. But the organization grew and changed, and became Search Institute in 1977. Mert continued as president until he retired in 1984, after which Peter L. Benson assumed the presidency. I joined the staff a few years later, in 1991.

In many ways, Search Institute was very different when Mert was its president—just as the 1960s and 1970s were very different from the 21st century. The research methods, the focus of our studies, the scope of our mission, and the ways we put our findings into practice have all changed significantly. 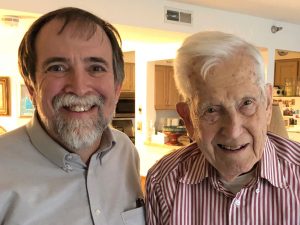 But what’s perhaps more striking are the seeds that Mert planted that continue to flourish and bear fruit in our work today.

When I visited with Mert in recent years, he expressed pride in the ways Search Institute’s mission, vision, and impact have expanded since he retired almost 35 years ago. He marveled that the organization’s work is being used in countries around the world. He was pleasantly startled to learn that Search Institute’s research and practice work was having an impact in many parts of society, from K-12 schools to human services to international development to out-of-school-time programs to juvenile justice—while continuing to flourish in the faith communities where he began the work 60 years ago.

Mert planted and cultivated the seeds for what Search Institute has been, has become, and is becoming. For that, we are deeply grateful.

Previous Next View All